On June 6, 2015, Deacon Alfred (Fred) D’Angelo was ordained to the Permanent Diaconate and a reception celebrating this milestone was held for him on Sunday, June 7th at St. Brendan’s.

Fred has been a parishioner at St. Brendan’s for eighteen years. A graduate of St. Joseph's Preparatory School in Philadelphia, Cheyney University, and the Philadelphia College of Osteopathic Medicine, Fred practiced family medicine in Red Lion and York Haven, Pennsylvania before moving to South Bend, Indiana. In South Bend he was the Medical Director and Family Practice residency director at Michiana Community Hospital which later merged with St. Joseph Hospital in Mishawaka. After moving to Ormond Beach Fred became involved in the parish serving as an extraordinary minister of Holy Communion, minister to the sick, sacristan, and choir member. He has also been a long standing member of the St. Brendan Elementary School Board and serves as the current school board president.

In 2012 he was elected president of the St. Brendan the Navigator Conference of the Society of St. Vincent de Paul, and oversaw the formation of the food pantry and “Hand Me Ups” thrift shop. His three year term ended in April. His “outside the walls of the Church” ministries include a weekly Communion service at Golden Abbey assisted living facility, working in the SVdP food pantry, and prison ministry at Tomoka Correctional Institute in Daytona Beach.

When asked what inspired him to become a Deacon, Fred credited the parishioners of St. Brendan’s. No matter what is asked of them, they always go above and beyond what is needed. He is proud to be able to serve such an amazing parish. 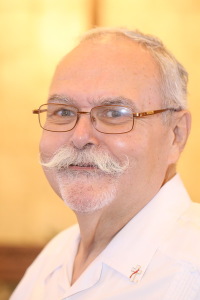